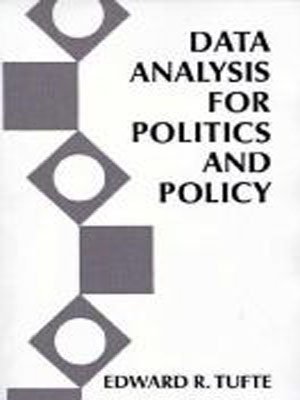 Data Analysis for Politics and Policy
by Edward R. Tufte

Description:
A great book for the beginning data analyst and a must for political science graduate students. It is a clear introduction to the use of regression analysis. Edward Tufte was a political scientist of the first order, an excellent statistician and a teacher par excellence.

Who Will Be the Next President?
by Alexander S. Belenky - Springer
This book addresses the peculiarities of the current presidential election system. It argues that any rules for electing a President that may replace the current ones should provide an equal representation of states as equal members of the Union ...
(2032 views)

High-Tech Europe: The Politics of International Cooperation
by Wayne Sandholtz - University of California Press
A study of cooperative efforts in the high-tech industries of Europe. Sandholtz examines why collaboration came late to these countries, how protective walls came down, how countries work together in economically sensitive areas.
(15437 views)

The Future of American Intelligence
by Peter Berkowitz - Hoover Institution Press
These essays from a diverse group of distinguished contributors deepen our understanding of the new national security threats posed by terrorism, by the proliferation of weapons of mass destruction, and by the spread of Islamic extremism.
(6517 views)

Power and Market: Government and the Economy
by Murray Rothbard - Von Mises Institute
This is ultimate manual for completely de-mystifying the myth of the state. The book will inoculate the reader against the even the slightest temptation to invoke the state as a solution to any social or economic problem.
(13721 views)