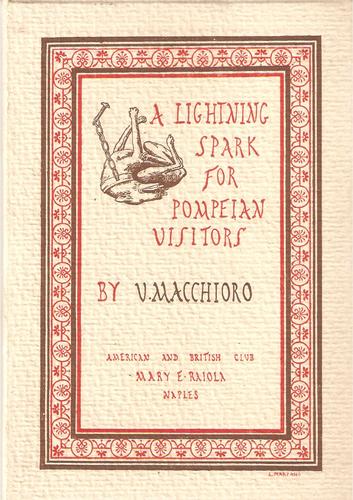 A Lightning Spark for Pompeian Visitors
by Vittorio Macchioro

Description:
The author aimed at giving to those who visit Pompei some directing ideas that may be for them a kind of lightning spark, so that they may penetrate into the very heart of the Roman civilization, and look at it and consider it not like a dead thing which may be of interest to them but does not require a special spiritual valuation, but like a live matter whose wide influence and echo, without even our knowing it, affect deeply the conscience of the modem man.

The Roman Empire: Roots of Imperialism
by Neville Morley - Pluto Press
This book does not offer a simplistic narrative. Instead, it analyses the origins and nature of Roman imperialism, its economic, social and cultural impact on the regions it conquered, and its continuing influence in debates about modern imperialism.
(2579 views)