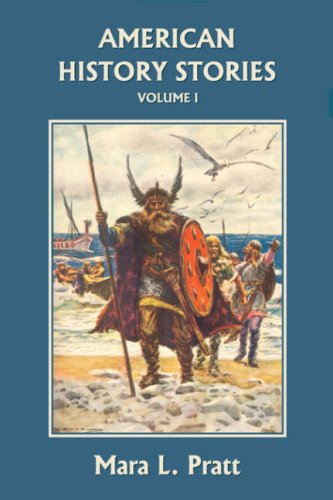 Description:
These are the stories of early exploration and founding of American colonies, conflicts over religion, and troubles with the Indians, culminating in the French and Indian War. These volumes are suitable for ages 8 and up.

A Child's History of England
by Charles Dickens - John W. Lovell Co.
The book takes its reader on a fascinating journey, from Ancient England and the Romans to Victoria's reign and Dickens' own lifetime. Full of sensational plots, high adventure and terrible tragedy, it will appeal to anyone who enjoys a good story.
(13360 views)

Aunt Charlotte's Stories of Greek History
by Charlotte Mary Yonge - Marcus Ward & co.
This little book traces Greek History so as to be intelligible to young children. In fact, it will generally be found that classical history is remembered at an earlier age than modern history, probably because the events are simple.
(10697 views)

Stories From Roman History
by Lena Dalkeith - E.P. Dutton & Co.
This book is a nice introduction to the history of early Rome, from the founding of the City to the death of Julius Caesar and the rise of Augustus. It is a child's history book, written on the sixth to eighth grade level.
(7964 views)

Kings and Queens of England
- Wikibooks
The text starts from the first Anglo-Saxon Kings of England, shows how the Crown changed many hands, it has battled Parliament, the period where the power finally transfered to Parliament through to the times of Elizabeth II.
(14142 views)