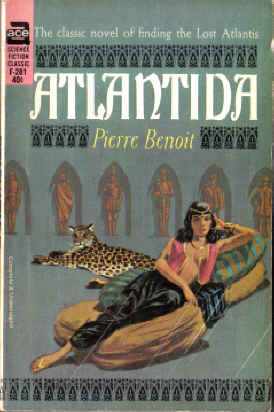 Description:
This French novel of 'Atlantis in the Sahara' made a huge splash when it was published. The exotic Saharan setting, the stories of desert survival, the overpowering allure of the last Queen of Atlantis, make a memorable, if a bit pulpy, read.

From the Earth to the Moon
by Jules Verne - Scribner, Armstrong
Written almost a century before the daring flights of the astronauts (first published in 1865), Jules Verne's prophetic novel of man's race to the stars is a classic adventure tale enlivened by broad satire and scientific acumen.
(13905 views)

Five Thousand Miles Underground
by Roy Rockwood - ManyBooks
What does an enterprising inventor do to follow up the marvelous dirigible-ship Monarch? Cobble it together into an astounding vessel that travels on both air and sea, and then head more than twenty thousand leagues under the Earth!
(4248 views)