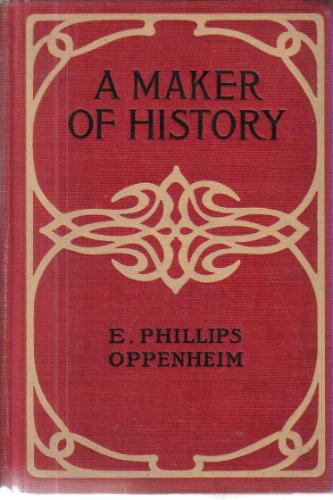 A Maker of History
by E. Phillips Oppenheim

Description:
Young Guy Poynton accidentally witnesses a clandestine political meeting in a remote forest on the border of Russia and Germany. Several weeks later he disappears from a night club in Paris. His lovely sister Phyllis arrives the next day and discovers that no one will help her find her brother. Police and consular officials seem indifferent. Following a tip, she goes to the same nightclub and she too disappears...

The Postmaster of Market Deignton
by E. Phillips Oppenheim - Ward, Lock & Co.
Mr Norman Scott is a young physician with a busy practice in London. He is called to visit a patient, Mr Humphrey Deignton, in the country, who suffers from gout. Dr. Scott has been smitten by Lord Deignton's lovely wife. Lord Deignton is murdered...
(2309 views)

The Wrath to Come
by E. Phillips Oppenheim - Little, Brown & Co.
The novel is occasionally mentioned as being the weird book that predicted WWII. Written in the lull between the two great wars it postulates a German/Japanese alliance and the plot revolves around Britain trying to get America into foreign intrigue.
(3083 views)

Peter Ruff and The Double Four
by E. Phillips Oppenheim - Little, Brown & Co.
A series of short stories about Gentleman Criminal and Master of Disguise Peter Ruff. Ruff devotes himself to embarrassing a police detective who caused him some problems and stole his woman. Light hearted with a bit of romance along with the action.
(2992 views)

The Man Without Nerves
by E. Phillips Oppenheim - Little, Brown & Co.
Mr. Tyssen has come to the small suburban village of Sandywayes to work on a mystery novel. Soon after he arrives, a prominent member of the community is found dead, an apparent suicide over unsuspected debts. Suspicion falls on the young Anthony ...
(2601 views)