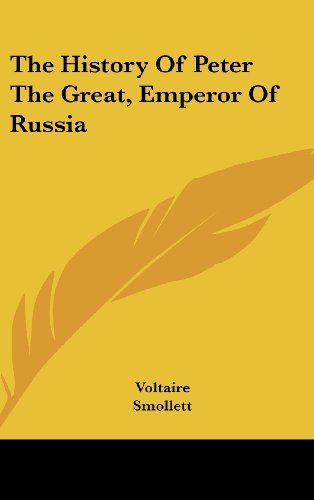 The History of Peter the Great, Emperor of Russia
by Voltaire

Description:
Peter the Great was tall, genteel, well made, with a noble aspect, piercing eyes and a robust constitution, fitted for all kinds of hardship and bodily exercise. He had a sound understanding, which is the basis of all real abilities; and to this was joined an active disposition, which prompted him to undertake and execute the greatest things.

The Young Hitler I Knew
by August E. V. Anderson - Houghton Mifflin Company
An extraordinary memoir by a man who actually met Hitler in 1904. Their passion for music created a friendship, and a roommate situation. This book deals with the darkest, perhaps the most formative, and the most interesting period of Hitler's life.
(16955 views)

Witch, Warlock, and Magician
by W. H. Davenport Adams - J. W. Bouton
The author gives a general introduction to alchemy in Europe and traces the development of magic and alchemy in England from the fourteenth century onwards. Adams established himself as a popular science writer, translator and lexicographer.
(7653 views)

A Thousand Years of Russian History
by Sonia E. Howe - Williams and Norgate
The aim in this book is to convey general impressions of the various stages passed through by Russia in the course of her evolution, and to give sketches of the lives of those rulers who have stamped their era with the mark of their personality.
(8919 views)

Destination Europe: The political and economic growth of a continent
by Kjell M. Torbiorn - Manchester University Press
Destination Europe interprets and interrelates the major political, economic and security developments in Europe from the end of the Second World War up until the present time and looks ahead to how the continent may evolve politically in the future.
(6503 views)