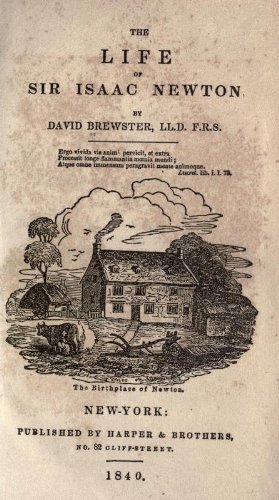 The Life of Sir Isaac Newton
by David Brewster

Description:
The name of Sir Isaac Newton has by general consent been placed at the head of those great men who have been the ornaments of their species. However imposing be the attributes with which time has invested the sages and the heroes of antiquity, the brightness of their fame has been eclipsed, by the splendour of his reputation ; and neither the partiality of rival nations, nor the vanity of a presumptuous age, has ventured to dispute the ascendency of his genius.

Charles Lyell and Modern Geology
by Thomas George Bonney - Macmillan and co
Lyell, while still a young man, determined that he would endeavour to put geology -- then only beginning to rank as a science -- on a more sound and philosophical basis. To accomplish this purpose, he spared no labour, shrank from no fatigue.
(13332 views)

The Voyage of the Beagle
by Charles Darwin - P.F. Collier & son
This readable book is the product of Darwin's amazing journey aboard the Beagle where he made observations that led to his theory of natural selection. The book is a lively and accessible introduction to the mind of this influential thinker.
(14157 views)