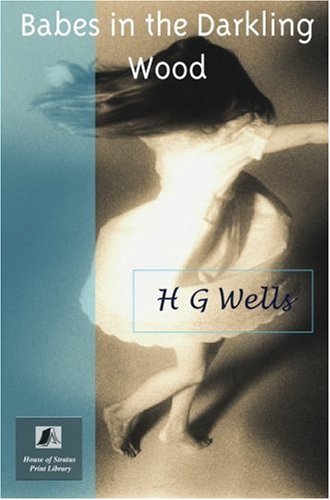 Babes in the Darkling Woods
by H. G. Wells

Description:
Stella and Gemini, the two babes of the story, come increasingly under the influence of a rather impressive psycho-therapeutist whose groundbreaking theories capture their imaginations. But when tragedy strikes they are soon to learn that intellectualism brings cold comfort.

The History of Mr. Polly
by H. G. Wells - Grosset & Dunlap
Mr. Alfred Polly is a dyspeptic, miserably married shopkeeper in what he terms that Beastly Silly Wheeze of a hole! -- Fishbourne, England. He is inclined to spark arguments and slapstick calamity wherever he goes. Education was lost on him...
(6475 views)

The War of the Worlds
by H. G. Wells - Heinemann
The most famous science fiction novel which caused the mistaken panic after Orson Welles's radio dramatization in 1938. The human civilization is under threat, Martians build killing machines and burning rays. The Earth proves harder, however.
(10704 views)

The Research Magnificent
by H. G. Wells - Macmillan
The story of W. P. Benham is the story of a man who was led into adventure by an idea. It was an idea that took possession of his imagination quite early in life, it grew with him and changed with him, it interwove at last completely with his being.
(3320 views)

Russia in the Shadows
by H. G. Wells - Hodder and Stoughton
The book depicts the grim situation of Russia during the civil war. On his trip Wells met many people and came away from this experience pessimistic about the future of Russia, noting that it was slipping into anarchy and even greater backwardness.
(8461 views)