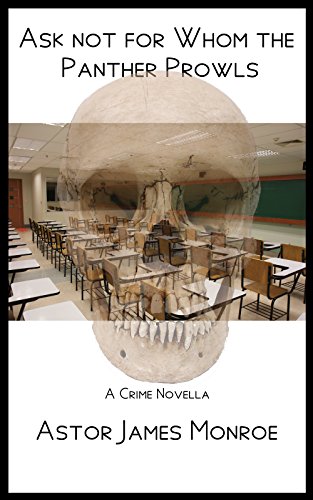 Ask Not For Whom The Panther Prowls
by Astor James Monroe

Description:
In this short novella, Dr. Shapre swears to 'go straight' and stick to academic pursuits. He is dragged into a series of polite poisonings after a student in his 'Physics for Poets' class dies of an apparent heart attack. Someone is slowly knocking off the undergraduates and the only common feature of the victims seems to be their involvement in an on-line English course. Is it?

Yellow Eyes
by Sonya Lee - Smashwords
Katrina is awakened by noises in her apartment. She barely escapes before her apartment goes up in flames. When the fire departments arrive, they find a grizzly discovery. Now Katrina is on the run, trying to stay one step ahead of her stalker.
(5868 views)

The Winning Clue
by James Hay - Grosset & Dunlap
When a woman's voice, pitched to the high note of utter terror, rang out on the late morning quiet of Manniston Road, Lawrence Bristow looked up from his newspaper vaguely, as if he doubted his own ears. He was reading an account of a murder...
(5909 views)

Cleek: the Man of the Forty Faces
by Thomas W. Hanshew - Feedbooks
An ex-cracksman turned Scotland Yard detective, Cleek's faultlessly dressed form is topped by an india-rubber-like face, of which he has remarkable control. With the power to distort and transform his visage, Cleek makes a super natural detective.
(8055 views)

When Thief Meets Thief
by Harry Stephen Keeler - ManyBooks
Tillary Steevens, novelist, stole the plots of all the stories that brought him fame. Jerry Hammond, rightful owner of the said plots, was driven by fate to making a living as a cracksman, after he had undergone a bewildering series of adventures.
(6517 views)