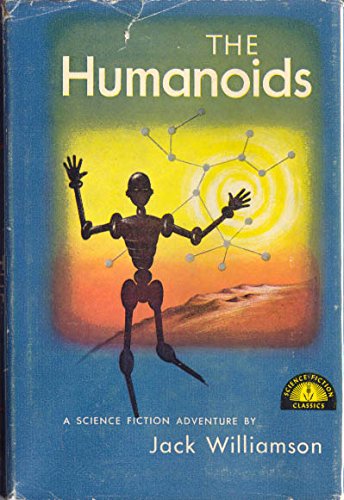 The Humanoids
by Jack Williamson

Description:
On the far planet Wing IV, a brilliant scientist creates the humanoids - sleek black androids programmed to serve humanity. But are they perfect servants - or perfect masters? Slowly the humanoids spread throughout the galaxy, threatening to stifle all human endeavor.

The Warriors of Day
by James Blish - Gerard Arthus
Tipton Bond was a man who lived for challenges - and Earth had no more challenges for him. But on Xota: One of the giants' faces bent over him, sardonically benign. You are a denizen of a planet which the Warriors of Day will reach and engulf ...
(3086 views)

Virgin Planet
by Poul Anderson - The Galaxy Publishing Corporation
He is Davis Bertram, a space-explorer. But how can he convince them he really is a man? Their legends have built Men into gods. Trying to be worthy of the Coming, the women imitate masculine virtues. They are warlike, ambitious, ruthless.
(2670 views)

Three Go Back
by J. Leslie Mitchell - The Galaxy Publishing Corporation
When their transatlantic airship is destroyed, three survivors find themselves in a lost world 25,000 years in the past, a world peopled by Neanderthals and Cro-Magnons. Claire Stranlay must somehow survive and does so in the only way she knows how.
(3086 views)