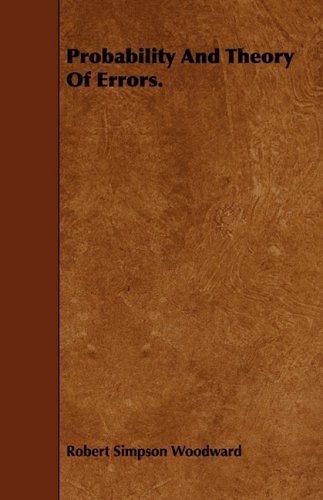 Probability and Theory of Errors
by Robert Simpson Woodward

Description:
The theory of probability and the theory of errors now constitute a formidable body of knowledge of great mathematical interest and of great practical importance. Though developed largely through applications to the more precise sciences of astronomy, geodesy, and physics, their range of applicability extends to all of the sciences.

Probability Course
by Gian-Carlo Rota - David Ellerman
In 1999, Gian-Carlo Rota gave his famous course, Probability, at MIT for the last time. The late John N. Guidi taped the lectures and took notes which he then wrote up in a verbatim manner conveying the substance and the atmosphere of the course.
(3560 views)

Introduction to Probability
by Leif Mejlbro - BookBoon
In this book you will find the basic mathematics of probability theory that is needed by engineers and university students. Topics as Elementary probability calculus, density functions and stochastic processes are illustrated.
(7609 views)