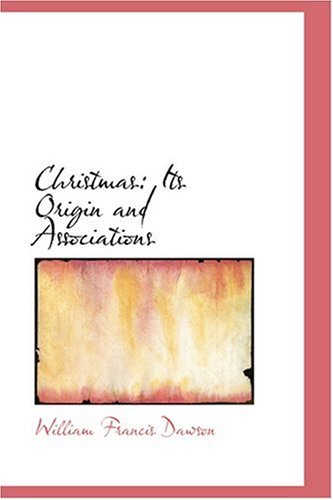 Christmas: Its Origin and Associations
by W. F. Dawson

Description:
The book about Christmas, its origin and associations, together with its historical events and festive celebrations during nineteen centuries: depicting, by pen and pencil, memorable celebrations, stately meetings of early kings, remarkable events, romantic episodes, brave deeds, picturesque customs, time-honoured sports, royal christmases, coronations and royal marriages, chivalric feats, court banquetings and revellings, christmas at the colleges and the inns of court, popular festivities, and christmas-keeping in different parts of the world, derived from the most authentic sources, and arranged chronologically.

A treatise on the True Devotion to the Blessed Virgin
by St. Louis-Marie Grignion de Montfort - Burns & Lambert
Necessity of devotion to our lady, In what devotion to Mary consists, The perfect consecration to Jesus Christ, Motives which recommend this devotion, Biblical figure of this perfect devotion, Wonderful effects of this devotion, Particular practices.
(15820 views)

Talmud of Jmmanuel
by John Grau
Jmmanuel, later called Jesus survived the crucifiction and later moved to Kashmir with his mother Mary, married and had children and teached others till he was 115 years old. His spirit was later reincarnated as Mohammed.
(13563 views)

The Gospel According to Brian
by Brian E Turner
This book is a story, not an academic treatise. The author has never been committed to a lifetime of study and involvement in Christianity and hence must be considered a dilettante in this field. This does give him the advantage of being objective.
(9672 views)

High History of the Holy Graal
- E. P. Dutton & co
According to Christian mythology, the Holy Grail was the dish, plate, or cup used by Jesus at the Last Supper, said to possess miraculous powers. This is the first volume of the Story of the Grail, compiled from a 16th-century copy of the original.
(13350 views)