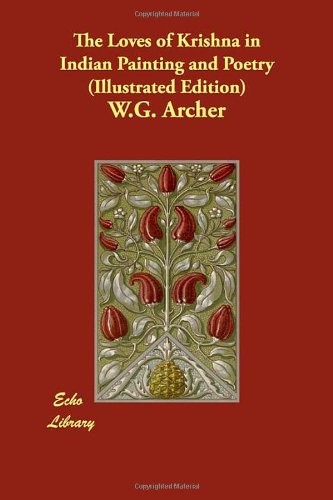 The Loves of Krishna in Indian Painting and Poetry
by W. G. Archer

Description:
During the twentieth century, a certain type of Indian painting began to fascinate the West. It was a product of Hindu courts in Rajasthan and the Punjab Hills, its chief concern was with the varied phases of romance. In all these pictures, romantic love was treated as the highest good and physical passion was interpreted with a freshness and innocence unequalled in the world's art.

Poetry's Afterlife: Verse in the Digital Age
by Kevin Stein - University of Michigan Press
The essays of this volume blend memoir, scholarship, and personal essay to survey the current poetry scene, trace how we arrived here, and suggest where poetry is headed in our increasingly digital culture. Poetry's spirited afterlife has come ...
(8286 views)

Rhymes and Meters: a practical manual for versifiers
by Horatio Winslow - The Editor Publishing Company
This book arranges in a convenient form the fundamentals of verse -- enough for the student who takes up verse as a literary exercise or for the older verse writer who has fallen into a rut or who is a bit shaky on theory.
(11268 views)

Paradise Lost
by John Milton - Dutton
Paradise Lost is the great epic poem of the English language, a tale of immense drama and excitement, of rebellion and treachery, of innocence pitted against corruption, in which God and Satan fight a bitter battle for control of mankind's destiny.
(14321 views)