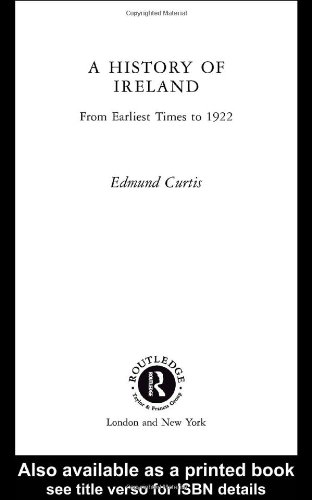 A History of Ireland
by Edmund Curtis

Description:
The traditions of the Irish people are the oldest of any race in Europe north and west of the Alps, and they themselves are the longest settled on their own soil. When they learned to write they recorded the tradition that they originally came from northern Spain.

The Berlin Wall: 20 Years Later
by Michael Jay Friedman, George Clack - U. S. Department of State
The Berlin Wall marked the geopolitical and ideological cleavage of Cold War Europe. Its demise marked the triumph of western models of personal autonomy and economic entrepreneurialism, and of the desire to live in freedom.
(8692 views)

Rapunzel's Children: The making of democracy in Germany
by Tim Mellage - Smashwords
The book provides a fascinating method to understanding the social developments of Germany over the past five hundred years -- starting with the Reformation of 1517, to the modern democratic state today -- based on the symbols from the fairy tale.
(6267 views)

The History of Peter the Great, Emperor of Russia
by Voltaire - Leavitt & Allen
Peter the Great was tall, genteel, well made, with a noble aspect, piercing eyes and a robust constitution, fitted for all kinds of hardship and bodily exercise. He had a sound understanding, which is the basis of all real abilities ...
(6599 views)

The History of the Thirty Years' War
by Friedrich Schiller - A. L. Burt
This is the only collected edition of the principal works of Schiller which is accessible to English readers. Detached poems or dramas have been translated at various times, since the first publication of the original works.
(10159 views)