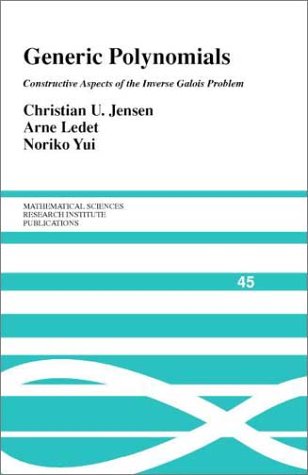 Description:
This book describes a constructive approach to the Inverse Galois problem. The main theme is an exposition of a family of "generic" polynomials for certain finite groups, which give all Galois extensions having the required group as their Galois group. The existence of such generic polynomials is discussed, and where they do exist, a detailed treatment of their construction is given. The book also introduces the notion of "generic dimension" to address the problem of the smallest number of parameters required by a generic polynomial.

The Elements of the Theory of Algebraic Numbers
by Legh Wilber Reid - The Macmillan company
It has been my endeavor in this book to lead by easy stages a reader, entirely unacquainted with the subject, to an appreciation of some of the fundamental conceptions in the general theory of algebraic numbers. Many numerical examples are given.
(6618 views)

Lectures on the Algebraic Theory of Fields
by K.G. Ramanathan - Tata Institute of Fundamental Research
These lecture notes on Field theory are aimed at providing the beginner with an introduction to algebraic extensions, algebraic function fields, formally real fields and valuated fields. We assume a familiarity with group theory and vector spaces.
(7722 views)

Algebraic Equations
by George Ballard Mathews - Cambridge University Press
This book is intended to give an account of the theory of equations according to the ideas of Galois. This method analyzes, so far as exact algebraical processes permit, the set of roots possessed by any given numerical equation.
(7118 views)