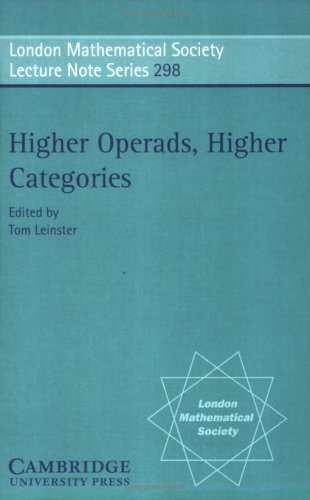 Description:
Higher-dimensional category theory is the study of n-categories, operads, braided monoidal categories, and other such exotic structures. It draws its inspiration from areas as diverse as topology, quantum algebra, mathematical physics, logic, and theoretical computer science. This is the first book on the subject and lays its foundations.

Basic Category Theory
by Tom Leinster - arXiv
This introduction to category theory is for readers with relatively little mathematical background. At its heart is the concept of a universal property, important throughout mathematics. For each new concept a generous supply of examples is provided.
(3278 views)

Higher-Dimensional Categories: an illustrated guide book
by Eugenia Cheng, Aaron Lauda - University of Sheffield
This work gives an explanatory introduction to various definitions of higher-dimensional category. The emphasis is on ideas rather than formalities; the aim is to shed light on the formalities by emphasizing the intuitions that lead there.
(9551 views)

Category Theory for Scientists
by David I. Spivak - arXiv
We attempt to show that category theory can be applied throughout the sciences as a framework for modeling phenomena and communicating results. In order to target the scientific audience, this book is example-based rather than proof-based.
(6307 views)