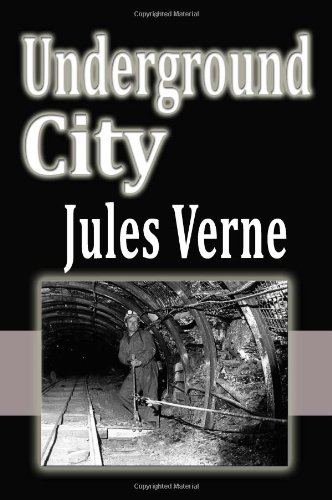 The Underground City
by Jules Verne

Description:
This novel follows the fortunes of the mining community of Aberfoyle near Stirling, Scotland. Receiving a letter from an old colleague, mining engineer James Starr sets off for the old Aberfoyle mine. Starr finds mine overman Simon Ford and his family living in a cottage deep inside the mine; he is astonished to find that Ford has made a discovery of the presence of a large vein of coal. From the outset, mysterious and unexplained happenings start to occur around the main characters, attributed initially to goblins and firemaidens.

Flatland: A Romance of Many Dimensions
by Edwin A. Abbot - Seeley and Co.
The book gives some accessible and charming explanations of geometry and physics for the curious non-mathematician. Flatland imagines a two-dimensional world inhabited by sentient geometric shapes who think their planar world is all there is.
(20529 views)

Off On A Comet, Or Hector Servadac
by Jules Verne - Vincent Parke And Co
Although time has obscured this book, Jules Verne's Off on a Comet is a remarkable work. Verne takes his characters on a journey to the depths of infinite space, to present what astronomers of that time really knew of outer space.
(11749 views)

The Wondersmith
by Fitz James O'Brien
O'Brien's work is often considered a forerunner of today's science fiction. The Wonder Smith is an early predecessor of robot rebellion, where toys possessed by evil spirits are transformed into living automatons who turns against their creators.
(5155 views)