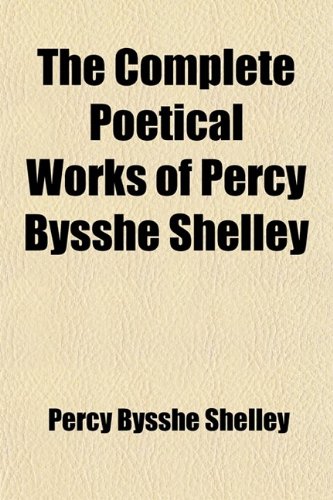 Description:
Percy Bysshe Shelley (1792 - 1822) was one of the major English Romantic poets and is critically regarded among the finest lyric poets in the English language. This edition of his "Poetical Works" contains all Shelley's ascertained poems and fragments of verse that have hitherto appeared in print.

The Waste Land
by T. S. Eliot - Horace Liveright
This poem is widely regarded as one of the most important poems of the 20th century and a central work of modernist poetry. It loosely follows the legend of the Holy Grail and the Fisher King combined with vignettes of contemporary British society.
(777 views)

HIS-tory
by Steve R. - Smashwords
A book of poetry powerfully expressing the different accounts of Barack Hussein Obama, President of the United States of America, during his ascension toward the White House. Taking extreme care in keeping it challenging and stimulating ...
(3398 views)

Moonlit Journey
by Owen Johnston
Please join me on this quest through dark passages -- yet there are rays of hope throughout as we seek paradise. This book contains a range of poetic and prosaic writing styles in one compilation that is thick with liminalism and imagery.
(7759 views)

The Kalevala
by Elias Lönnrot - Sacred Texts
The Kalevala is a book and epic poem compiled from Finnish and Karelian folklore in the nineteenth century. It is held to be the national epic of Finland and is traditionally thought of as one of the most significant works of Finnish literature.
(12986 views)