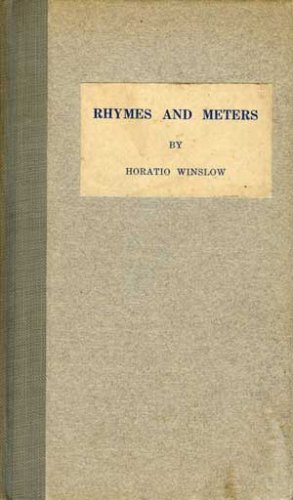 Rhymes and Meters: a practical manual for versifiers
by Horatio Winslow

Description:
This book has been compiled with one end in view: to arrange in a convenient and inexpensive form the fundamentals of verse -- enough for the student who takes up verse as a literary exercise or for the older verse writer who has fallen into a rut or who is a bit shaky on theory. It is even hoped that there may be a word of help for some embryo poet.

The Compleat Panther Cycles
by William F. DeVault - Lulu.com
This volume has been called one of the most ambitious books of poetry ever written: the full revelation of the legendary Panther Cycles. More than six hundred and forty poems chart the ups and downs of the intensely dysfunctional love affair.
(8100 views)

Paradise Lost
by John Milton - Dutton
Paradise Lost is the great epic poem of the English language, a tale of immense drama and excitement, of rebellion and treachery, of innocence pitted against corruption, in which God and Satan fight a bitter battle for control of mankind's destiny.
(11593 views)

Leaves of Grass
by Walt Whitman
Walt Whitman created a daringly new kind of poetry that became a major force in world literature. First published in 1855 with only twelve poems, it was greeted as the most extraordinary piece of wit and wisdom that America has yet contributed.
(16244 views)

Where Is the Light? Poems 1955-2005
by Oscar Mandel - Spectrum Productions
Fifty years of poetry, much of it previously published in literary journals. Oscar Mandel, Professor of literature, is the author of numerous acclaimed books of poetry, drama, essays, fiction, literary criticism, translation, and art history.
(12296 views)