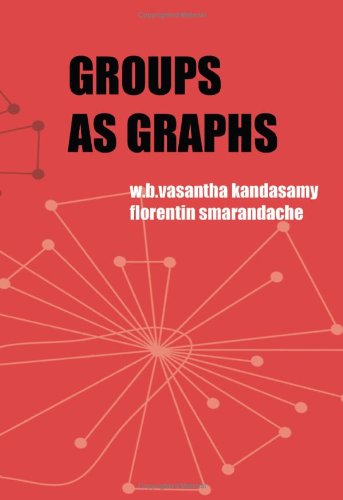 Groups as Graphs
by W. B. V. Kandasamy, F. Smarandache

Description:
In this book, for the first time, the authors represented every finite group in the form of a graph. This study is significant because properties of groups can be immediately obtained by looking at the graphs of the groups.

Elements of Group Theory
by F. J. Yndurain - arXiv
The following notes are the basis for a graduate course. They are oriented towards the application of group theory to particle physics, although some of it can be used for general quantum mechanics. They have no pretense of mathematical rigor.
(15021 views)

Group Theory: Birdtracks, Lie's, and Exceptional Groups
by Predrag Cvitanovic - Princeton University Press
A book on the theory of Lie groups for researchers and graduate students in theoretical physics and mathematics. It answers what Lie groups preserve trilinear, quadrilinear, and higher order invariants. Written in a lively and personable style.
(14145 views)

Introduction to Groups, Invariants and Particles
by Frank W. K. Firk - Orange Grove Texts Plus
This is an introduction to group theory, with an emphasis on Lie groups and their application to the study of symmetries of the fundamental constituents of matter. The text was written for seniors and advanced juniors, majoring in the physical sciences.
(17984 views)

Smarandache Semigroups
by W. B. Vasantha Kandasamy - American Research Press
The Smarandache semigroups exhibit properties of both a group and a semigroup simultaneously. This book assumes the reader to have a good background on group theory; we give some recollection about groups and some of its properties for reference.
(9102 views)