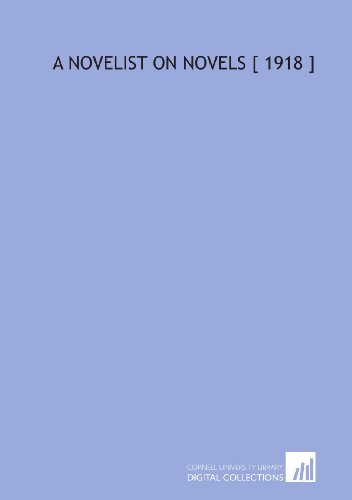 A Novelist on Novels
by Walter Lionel George

Description:
The chapters that follow have been written in varying moods, and express the fluctuating feelings aroused in the author by the modern novel and its treatment at the hands of the public. Though unrelated with the novel, the chapters on 'Falstaff,' 'The Esperanto of Art,' and 'The Twilight of Genius' have been included, either because artistically in keeping with other chapters, or because their general implications affect the fiction form.

English Literature
by William J. Long - Ginn and Co
The history of English literature from Anglo-Saxon times to the close of the Victorian Era. The book should encourage the desire to read the best books, to interpret literature historically, and show the steady development of our literature.
(24109 views)

USA Literature in Brief
by Kathryn VanSpanckeren - U. S. Department of State
The book describes the contributions to American literature of some of the best-recognized American poets, novelists, philosophers and dramatists from pre-Colonial days through the present. Major literary figures are discussed in detail.
(9403 views)

Horizons of Enchantment: Essays in the American Imaginary
by Lene M. Johannessen - Dartmouth College Press
Johannessen's subject here is the almost mystical American belief in the promise and potential of the individual, that can loosely be characterized as a fundamental and unwavering faith in the secular sanctity of the American project of modernity.
(4864 views)

The Reverend Mark Twain: Theological Burlesque, Form and Content
by Joe B. Fulton - The Ohio State University Press
With his distinctive genius, Twain entered the religious dialogue of his time, employing the genres of belief as his vehicle for criticizing church and society. Twain's burlesques reveal a writer fully engaged with the religious ferment of his day.
(4198 views)