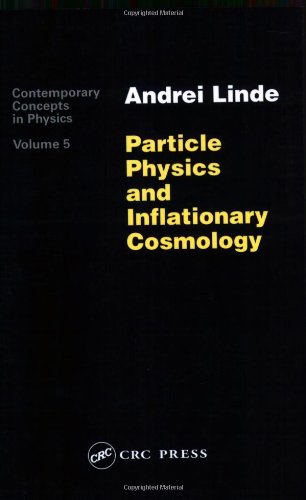 Description:
This volume is a complete and systematic monograph on inflationary cosmology and cosmological phase transitions. Dr. Linde, a primary developer of these theories, offers a thorough investigation of modern cosmology and its relation to elementary particle physics, including a large introductory section containing a complete discussion of inflationary cosmology for those not yet familiar with the theory.

Lectures on Inflation and Cosmological Perturbations
by David Langlois - arXiv
Inflation is today the main theoretical framework that describes the early Universe. These lectures give an introduction to inflation and the production of primordial perturbations, and a review of some of the latest developments in this domain.
(8896 views)

Introduction to Early Universe Cosmology
by Robert H. Brandenberger - arXiv
This text covers the theory of cosmological perturbations, which describes the generation of inhomogeneities in the early universe and their evolution until the current time. The theory is applied to three classes of models of the early universe.
(9615 views)

Dynamics of the Universe in Problems
by Yu. L. Bolotin, et al. - UniverseInProblems.com
Problem book on cosmology that includes its spectacular recent achievements. There are over 1000 problems, covering topics from the dynamics of the expanding Universe and CMB to cosmology beyond the Lambda-CDM model and holography.
(9256 views)

Cosmic Microwave Background Anisotropies up to Second Order
by Nicola Bartolo, Sabino Matarrese, Antonio Riotto - arXiv
These notes present the computation of the system of Boltzmann equations describing the evolution of the photon, baryon and cold dark matter fluids up to second order in perturbation theory. They follow the time evolution of the CMB anisotropies.
(8426 views)