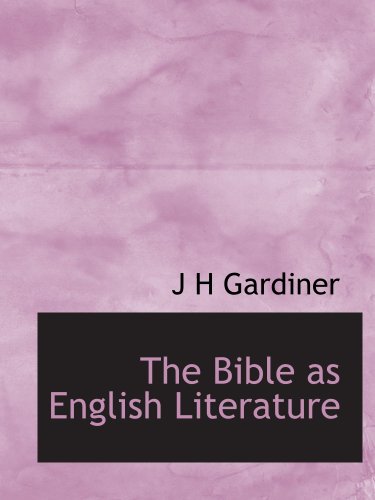 The Bible as English Literature
by John Hays Gardiner

Description:
The author's aim has been to make students as familiar as possible with the English Bible, and to throw light on its literary forms by bringing together facts from the history of its sources and from the history of the translation into English.

A History of Roman Literature
by Harold North Fowler - D. Appleton and Co.
This book is intended primarily for use as a textbook in schools and colleges. I have therefore given more dates and more details about the lives of authors than are in themselves important, because dates are convenient aids to memory ...
(4429 views)

Shakespeare, Bacon and the Great Unknown
by Andrew Lang - Longmans, Green, and co.
The theory that Francis Bacon was the author of Shakespeare's plays, has now been for fifty years before the learned world. Its advocates met with less support than they had reason to expect. The Baconian theory is universally rejected in England.
(6087 views)

Literature, the Humanities, and Humanity
by Theodore L. Steinberg - Open SUNY Textbooks
The book attempts to make the study of literature more than simply another school subject that students have to take. At a time when all subjects seem to be valued only for their testability, this book tries to show the value of studying literature.
(4232 views)

Homer and His Age
by Andrew Lang
The aim of 'Homer and His Age' is to prove that the Homeric Epics as wholes and apart from passages gravely suspected in antiquity present a perfectly harmonious picture of the entire life and civilization of one single age.
(9607 views)