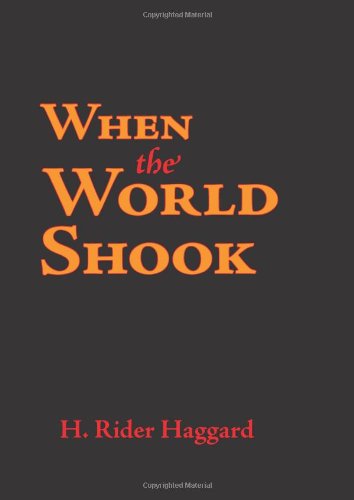 When the World Shook
by Henry Rider Haggard

Description:
Three Englishmen, marooned on a mysterious South Sea island, learn of the islanders' powerful god Oro, who has been sleeping for 250,000 years. They manage to wake him, along with his beautiful daughter, who is the spitting image of the hero's dead wife, while he is a ringer for her lost love. Other residents of an ancient Atlantean civilization are also returned to life in this tale of spirit travel, reincarnation, occult powers, teleportation, a subterranean city, the elixir of life, and considerable mythic depth.

The People of the Mist
by H. Rider Haggard - Ditchingham
Sir Henry Rider Haggard wrote many great works, and this is an underappreciated treasure, a beautifully written, exciting, and moving tale of adventure, love, sacrifice and a lost civilization in Africa. Written in the late 1800's.
(5920 views)

Moon of Israel: A Tale of the Exodus
by H. Rider Haggard - ManyBooks
This is an amazing retelling of the Biblical story of the Exodus from the view point of Ana, the Egyptian scribe. The novel includes historical information, action, adventure, romance, and internal struggles that are still seen in today's times.
(3798 views)

She
by Henry Rider Haggard - Longmans, Green, and Co.
This is a wonderfully compelling story about three Englishmen, an aging University professor, his adventurous young ward, and their faithful servant, traveling into the unknown African interior in search of a mythical source of immortality.
(9891 views)

Eric Brighteyes
by Henry Rider Haggard - Longmans, Green
A must for all Haggard fans, 'Eric Brighteyes' is strongly recommended to anyone who enjoys a great tale of heroic endeavour. Perhaps the fastest-paced of all Haggard's many novels, it races from one highspot to another with vivid scene-setting.
(7386 views)