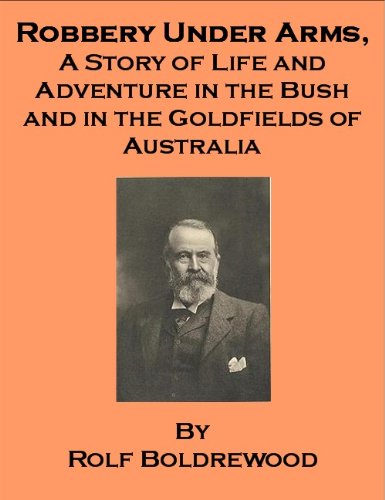 Robbery Under Arms
by Rolf Boldrewood

Description:
A story of life and adventure in the bush and in the goldfields of Australia. The book deals with the classic idea of an honest man driven to crime and the suffering it brings him. It is also full of the adventure and excitement that comes along with the criminal life.

The Swiss Family Robinson
by Jean Rudolph Wyss - Rand McNally & Company
Swept off course by a storm, a Swiss pastor, his wife, and four sons are shipwrecked on an uncharted tropical island. Thus begins the classic story of survival and adventure that has fired the imaginations of readers since it first appeared in 1812.
(10128 views)

A Yankee Flier with the R.A.F.
by Al Avery - Grosset & Dunlap
Here he was, really a fugitive from his distant homeland, standing in the Royal Air Force mess while outside the closely curtained windows all of London lay under an inky blackout, listening and waiting for the whine of the bombers.
(6360 views)

The Secret Of The Australian Desert
by Ernest Favenc - Blackie
The unknown fate of Ludwig Leichhardt has always centred most of the romance of story about his memory. No clue to the disappearance of the whole party has ever been discovered. This mystery of Australian exploration is the groundwork of the story.
(12785 views)

Under the Andes
by Rex Stout
This early novel by Rex Stout follows two men and a woman on a vacation in the Andes .. a vacation which takes them to a lost world beneath the mountains! This novel is a scientific romance of the pulp adventure variety.
(6565 views)