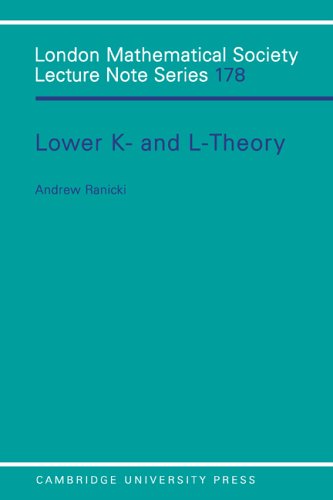 Description:
This is the first treatment in book form of the applications of the lower K- and L-groups (which are the components of the Grothendieck groups of modules and quadratic forms over polynomial extension rings) to the topology of manifolds such as Euclidean spaces, via Whitehead torsion and the Wall finiteness and surgery obstructions. The author uses only elementary constructions and gives a full algebraic account of the groups involved.

An Introduction to Algebraic Surgery
by Andrew Ranicki - arXiv
Browder-Novikov-Sullivan-Wall surgery theory investigates the homotopy types of manifolds, using a combination of algebra and topology. It is the aim of these notes to provide an introduction to the more algebraic aspects of the theory.
(7899 views)

Lectures on Polyhedral Topology
by John R. Stallings - Tata Institute of Fundamental Research
These notes contain: The elementary theory of finite polyhedra in real vector spaces; A theory of 'general position' (approximation of maps), based on 'non-degeneracy'. A theory of 'regular neighbourhoods' in arbitrary polyhedra; etc.
(6050 views)