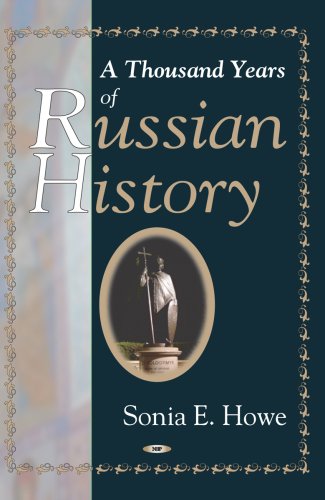 A Thousand Years of Russian History
by Sonia E. Howe

Description:
The aim in 'A Thousand Years of Russian History' is to convey general impressions of the various stages passed through by Russia in the course of her evolution, and to give sketches of the lives of those of her rulers who have stamped their era with the mark of their personality.

The Berlin Wall: 20 Years Later
by Michael Jay Friedman, George Clack - U. S. Department of State
The Berlin Wall marked the geopolitical and ideological cleavage of Cold War Europe. Its demise marked the triumph of western models of personal autonomy and economic entrepreneurialism, and of the desire to live in freedom.
(8692 views)

A History of Germany
by Bayard Taylor - Project Gutenberg
My aim has been to present a clear narrative, omitting no episode of importance, yet preserving a distinct line of connection from century to century. Besides referring to the best authorities, I have based my labors mainly upon three recent works.
(9379 views)

The Young Hitler I Knew
by August E. V. Anderson - Houghton Mifflin Company
An extraordinary memoir by a man who actually met Hitler in 1904. Their passion for music created a friendship, and a roommate situation. This book deals with the darkest, perhaps the most formative, and the most interesting period of Hitler's life.
(17103 views)

Destination Europe: The political and economic growth of a continent
by Kjell M. Torbiorn - Manchester University Press
Destination Europe interprets and interrelates the major political, economic and security developments in Europe from the end of the Second World War up until the present time and looks ahead to how the continent may evolve politically in the future.
(6584 views)