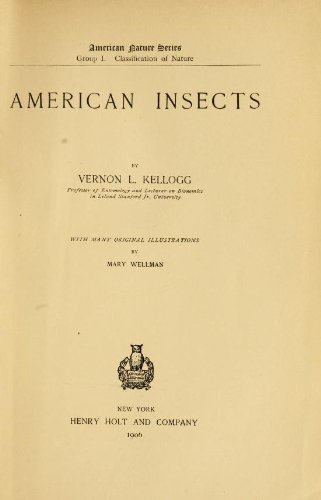 Description:
This book is written in the endeavor to foster an interest in insect biology on the part of students of natural history, of nature observers, and of general readers; it provides in a single volume a general systematic account of all the principal groups of insects as they occur in America, together with special accounts of the structure, physiology, development and metamorphoses, and of certain particularly interesting and important ecological relations of insects with the world around them.

The Common Spiders of the United States
by James Henry Emerton - Ginn & Co.
A small and simple book for readers who want to know a little about spiders in general and especially those species that they often meet with. It is hoped this book will answer the purpose and help to lessen the prejudice against spiders.
(3998 views)

Collecting and Preserving Insects and Arachnids
by I.M. Millar, V.M Uys, R.P. Urban - ARC-PPRI
A manual for entomology and arachnology. Techniques to collect, process and prepare insects and arachnids for study are presented, as well as important information on how to preserve and curate material in a reference collection.
(7711 views)

Butterflies Worth Knowing
by Clarence M. Weed - Doubleday, Page & Company
In this little book an attempt has been made to discuss the more abundant and widely distributed butterflies of eastern North America from the point of view of their life histories and their relations to their surroundings.
(6108 views)

Handbook of Medical Entomology
by O. A. Johanssen, W. A. Riley - The Comstock Publishing Company
The object of the Handbook is to afford a general survey of the field, and to put the student of medicine and entomology in touch with the discoveries and theories which underlie some of the most important modern work in preventive medicine.
(12675 views)