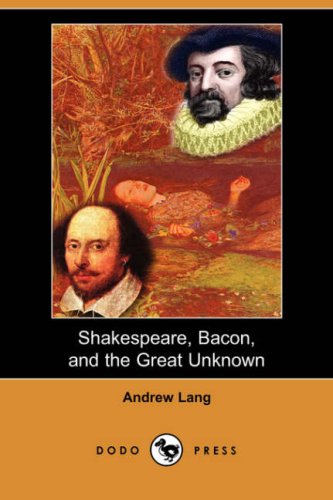 Shakespeare, Bacon and the Great Unknown
by Andrew Lang

Description:
The theory that Francis Bacon was, in the main, the author of 'Shakespeare's plays,' has now been for fifty years before the learned world. Its advocates have met with less support than they had reason to expect. The Baconian theory is universally rejected in England ...

A History of Roman Literature
by Harold North Fowler - D. Appleton and Co.
This book is intended primarily for use as a textbook in schools and colleges. I have therefore given more dates and more details about the lives of authors than are in themselves important, because dates are convenient aids to memory ...
(5893 views)

Oscar Wilde: A Critical Study
by Arthur Ransome - Project Gutenberg
He saw art as self-expression and life as self-development. He felt that his life was material on which to practise his powers of creation, and handled it and brooded over it like a sculptor planning to make a dancing figure out of a pellet of clay.
(7494 views)

Getting to be Mark Twain
by Jeffrey Steinbrink - University of California Press
Mark Twain is one of our most accessible cultural icons, a figure familiar to virtually every American and renowned internationally. But he was not always as we know him today. This is the story of the coming of age of Mark Twain.
(8764 views)

A Novelist on Novels
by Walter Lionel George - W. Collins Sons & Co
The book expresses the fluctuating feelings aroused in the author by the modern novel and its treatment at the hands of the public. The chapters on 'Falstaff,' 'The Esperanto of Art,' and 'The Twilight of Genius' have been included.
(7279 views)