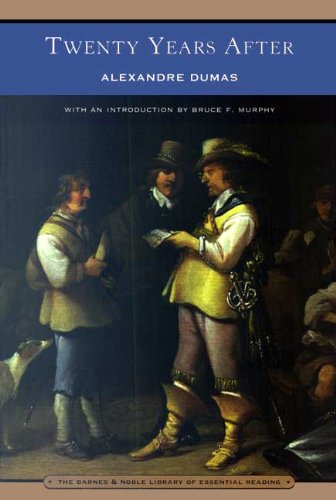 Twenty Years After
by Alexandre Dumas

Description:
Two decades have passed since the musketeers triumphed over Cardinal Richelieu and Milady. The fantastic adventures of the Three Musketeers continue - starting with an intrigue surrounding D'Artagnan who has, for twenty years, remained a lieutenant.

The Man in the Iron Mask
by Alexandre Dumas - ManyBooks
A mysterious prisoner wearing an iron mask languishes deep within the Bastille. D'Artagnan and the Musketeers find themselves tangled in a web of intrigue when suspicions about the prisoner's identity begin to emerge. A gripping adventure novel.
(6752 views)

The Regent's Daughter
by Alexandre Dumas - Peter Fenelon Collier
On the 8th February, 1719, a carriage, with the motto of Orleans, preceded by two outriders and a page, entered the porch of the Abbey of Chelles, as the clock struck ten, and, the door having been quickly opened, its two occupants stepped out.
(4164 views)

Celebrated Crimes (Complete)
by Alexandre Dumas pere - Project Gutenberg
The contents of these volumes, as well as the motives which led to their inception, are unique. The book was not written for children. The novelist has spared no language -- has minced no words -- to describe the violent scenes of a violent time.
(8495 views)

Ten Years Later
by Alexandre Dumas - P.F. Collier
Ten Years Later is the third and last of the d'Artagnan Romances, following The Three Musketeers and Twenty Years After. The principal heroes of the novel are the musketeers. The narrative of this novel is set between 1660 and 1673.
(2310 views)