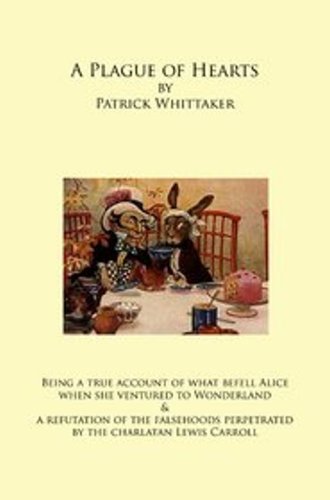 A Plague of Hearts
by Patrick Whittaker

Description:
On an otherwise normal day in Wonderland, the Knave of Hearts is arrested by the secret police. Outraged by what he believes to be an injustice, his valet, the March Hare, sets out to free him. Along the way he attends a mad tea party, witnesses the death and resurrection of the Queen of Hearts and uncovers a terrifying secret that could destroy not only his world, but ours too.

Bagels, Barry Bonds, and Rotten Politicians
by Burton S. Blumert - Ludwig von Mises Institute
Burton Blumert is an entrepreneur who knows not only all that there is to know about precious metals but also about politics and economics. He offers his wide-ranging insights in this funny, charming, and also learned collection of essays.
(17851 views)

The Sick Day Handbook: Strategies and Techniques for Faking It
by Ellie Bishop - Booktrope
A hilarious guide to the art of taking sick leave when you really need it. Filled with symptoms and prescriptions for common illnesses and proper stage-setting techniques, you'll have a pool of credible excuses just waiting to be used.
(9430 views)

The Handbook of Conundrums
by Edith B. Ordway - George Sully and Company
This book presents a grindstone whereon the reader may whet his wits. It is of sufficient hardness to resist the coarsest metal of broad-bladed humor, and of sufficient fineness of grain to edge the best steel of fancy.
(8138 views)

The Cynic's Rules of Conduct
by Chester Field Jr. - Henry Altemus Company
'There is only one worse break than asking a woman her age: it is looking incredulous when she tells it.' 'If you would have a serene old age never woo a girl who keeps a diary.' 'A chef is a cook who gets a salary instead of wages.'
(10660 views)