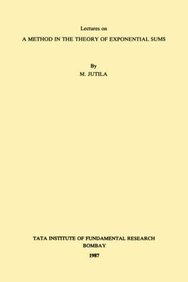 Lectures on a Method in the Theory of Exponential Sums
by M. Jutila

Description:
It was my first object to present a selfcontained introduction to summation and transformation formulae for exponential sums involving either the divisor function d(n) or the Fourier coefficients of a cusp form; these two cases are in fact closely analogous. Secondly, I wished to show how these formulae can be applied to the estimation of the exponential sums in question.

Lectures on Forms of Higher Degree
by J.I. Igusa - Tata Institute of Fundamental Research
One of the principal objectives of modern number theory must be to develop the theory of forms of degree more than two,to the same satisfactory level in which the theory of quadratic forms is found today as the work of eminent mathematicians.
(6444 views)

Diophantine Analysis
by R. D. Carmichael - John Wiley & Sons
The author's purpose has been to supply the reader with a convenient introduction to Diophantine Analysis. No attempt has been made to include all special results, but a large number of them are to be found both in the text and in the exercises.
(9192 views)