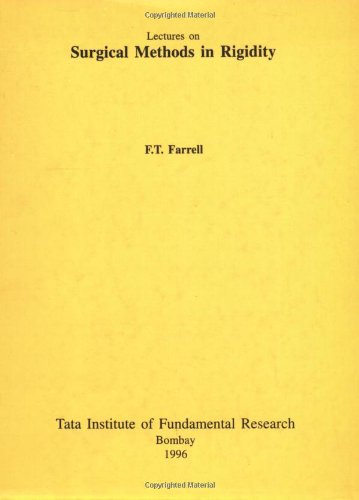 Description:
This book is an introduction to the topological rigidity theorem for compact non-positively curved Riemannian manifolds. It contains a quick informal account of the background material from surgery theory and controlled topology prerequesite to this result. It is intended for researchers and advanced graduate students in both differential geometry and topology.

Lectures on Polyhedral Topology
by John R. Stallings - Tata Institute of Fundamental Research
These notes contain: The elementary theory of finite polyhedra in real vector spaces; A theory of 'general position' (approximation of maps), based on 'non-degeneracy'. A theory of 'regular neighbourhoods' in arbitrary polyhedra; etc.
(5518 views)

Geometric Topology: Localization, Periodicity and Galois Symmetry
by Dennis Sullivan - Springer
In 1970, Sullivan circulated this set of notes introducing localization and completion of topological spaces to homotopy theory, and other important concepts. The notes remain worth reading for the fresh picture they provide for geometric topology.
(5666 views)

Foliations and the Geometry of 3-manifolds
by Danny Calegari - Oxford University Press
The book gives an exposition of the 'pseudo-Anosov' theory of foliations of 3-manifolds. This theory generalizes Thurston's theory of surface automorphisms, and reveals an intimate connection between dynamics, geometry and topology in 3 dimensions.
(8774 views)

Notes on Basic 3-Manifold Topology
by Allen Hatcher
These pages are really just an early draft of the initial chapters of a real book on 3-manifolds. The text does contain a few things that aren't readily available elsewhere, like the Jaco-Shalen/Johannson torus decomposition theorem.
(6750 views)