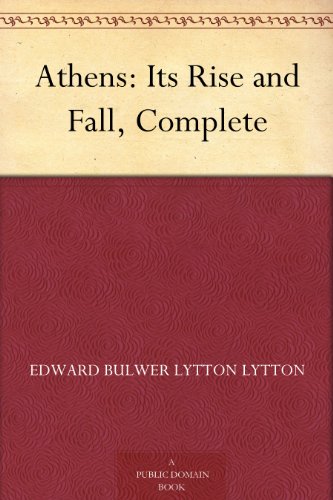 Athens: Its Rise and Fall
by Edward Bulwer-Lytton

Description:
Since it is the letters, yet more than the arms or the institutions of Athens, which have rendered her illustrious, it is my object to combine an elaborate view of her literature with a complete and impartial account of her political transactions.

The Cambridge Ancient History
by J. B. Bury - Cambridge University Press
Designed as the first part of a continuous history of European peoples. Starting with the remote and dim beginnings, the Ancient History will go down to the victory of Constantine the Great, the point at which the Medieval takes up the story.
(10958 views)

Hegemony to Empire
by Robert Morstein Kallet-Marx - University of California Press
In one of the most important contributions to the study of Roman imperialism to appear in recent years, Robert Kallet-Marx argues for a less simplistic, more fluid understanding of the evolution of Roman power in the Balkans, Greece, and Asia Minor.
(11228 views)

Religion in Hellenistic Athens
by Jon D. Mikalson - University of California Press
Drawing from epigraphical, historical, literary, and archaeological sources, Mikalson traces the religious cults and beliefs of Athenians from the battle of Chaeroneia in 338 B.C. to the devastation of Athens by Sulla in 86 B.C.
(10396 views)

The Ancient Cities of the New World
by Désiré Charnay - Chapman & Hall
I recount the history of a civilisation which has long passed away, which is hardly known. My explorations led me to the uplands of Mexico, the first establishments of the civilising race, and enabled me to trace the Toltecs step by step ...
(9679 views)