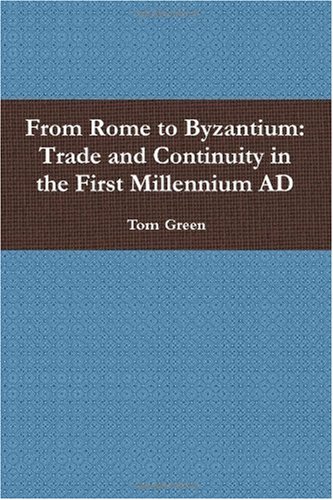 From Rome to Byzantium
by Tom Green

Description:
Provides a detailed overview of trading activity in the Roman and Byzantine Mediterranean, grounded in recent archaeological research. In particular, it is argued that an element of 'free trade' played a significant role in the direction and nature of trading in Classical and Late Antiquity. It is also suggested that the so-called 'Dark Ages' of the seventh and eighth centuries saw more continuity in terms of both commercial activity and urban life than is sometimes admitted.

Religion in Hellenistic Athens
by Jon D. Mikalson - University of California Press
Drawing from epigraphical, historical, literary, and archaeological sources, Mikalson traces the religious cults and beliefs of Athenians from the battle of Chaeroneia in 338 B.C. to the devastation of Athens by Sulla in 86 B.C.
(10495 views)

Athens from Cleisthenes to Pericles
by C. W. Fornara, L. J. Samons - University of California Press
This book covers the history of the Alcmeonid family of Cleisthenes and Pericles, the nature and development of Athenian democracy, the growth of Athenian empire, and the burgeoning antagonism between Athens and Sparta.
(14195 views)

Initiation into the Mysteries of the Ancient World
by Jan N. Bremmer - De Gruyter Open
This book explores ancient mystery cults and their influence on emerging Christianity. The author discusses the famous Eleusian Mysteries as well as lesser-known Greek and Roman mysteries, offering an in-depth analysis of this fascinating phenomenon.
(6407 views)