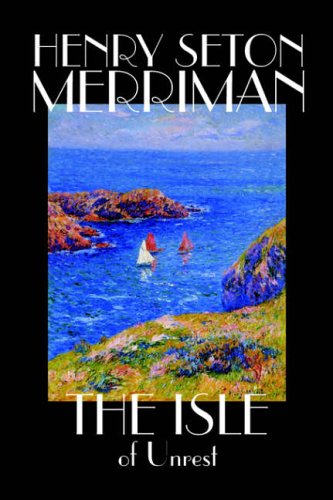 The Isle of Unrest
by Henry Seton Merriman

Description:
The afternoon sun was lowering towards a heavy bank of clouds hanging still and sullen over the Mediterranean. A mistral was blowing. The last yellow rays shone fiercely upon the towering coast of Corsica, and the windows of the village of Olmeta glittered like gold...

The Unlit Lamp
by Radclyffe Hall - eBooks@Adelaide
The story of Joan Ogden, a young girl who dreams of setting up a flat in London with her friend Elizabeth (a so-called Boston marriage) and studying to become a doctor, but feels trapped by her manipulative mother's emotional dependence on her.
(5598 views)

A Traveler from Altruria
by William Dean Howells - Harper & Brothers Publishers
A utopian novel, set during the early 1890s in a fashionable summer resort somewhere on the East Coast. The social differences in America are shown by having the rich staying at a luxurious resort near the farms of workers in a lower class.
(5928 views)

Some Do Not...
by Ford Madox Ford - Duckworth and Co.
Christopher and Valentine are on the verge of becoming lovers until he must return to his WWI regiment. An unforgettable exploration of the tensions of a society confronting catastrophe, sexuality, power, madness, and violence.
(6833 views)

Shirley
by Charlotte Bronte - Harper
Set during the Napoleonic wars, Shirley is a passionate depiction of conflict among classes, sexes, and generations. Struggling manufacturer Robert Moore considers marriage to the wealthy Shirley Keeldar, yet his heart lies with Caroline ...
(7351 views)