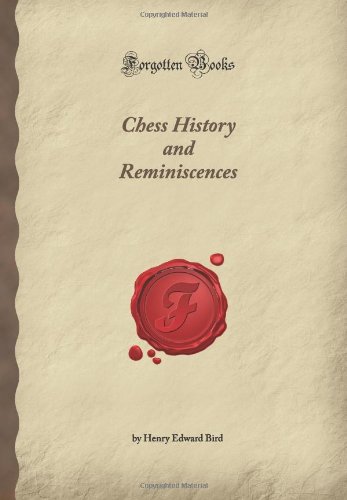 Description:
This little work is but a condensation and essence of a much larger one, containing the result of what can be discovered concerning the origin and history of chess, combined with some of my own reminiscences of 46 years past both of chess play and its exponents...

Chess Opening Theory
- Wikibooks
The opening of a game of chess is a battle between two equally matched armies. There is no method that will secure one player a decisive advantage independent from what his opponent does. If there were, no one would play chess.
(7494 views)

The Art of Chess
by James Mason - Horace Cox
This book is really a complete reference of all aspect of the game and suitable for beginners and casual players. Combinations are analyzed and presented in a practical way, making it easier to discover patterns and see moves ahead more clearly.
(9572 views)

Chess
by Warren Wilkinson, Bill Alexander - Wikibooks
Chess does not involve chance, the outcome completely depends on the players. The book covers the basics of chess, playing and notating the game, tactics, strategy, basic openings, examples of chess games, the endgame, variants and tournaments.
(8963 views)