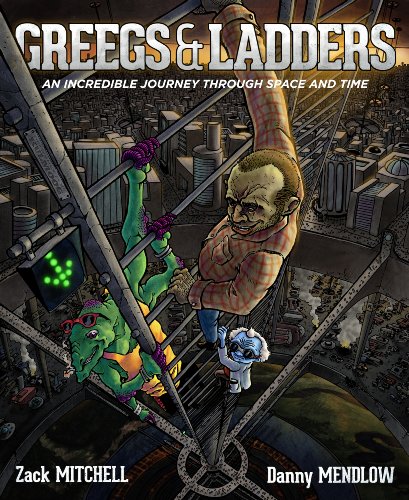 Description:
Greegs and Ladders is a wildly exciting tale of three oddball characters romping around space and time. Equal parts social satire and fun loving adventure, Greegs promises laughs, a few mildly intelligent and/or interesting observations, and several run-on sentences. You'll also get to find out what the hell Greegs are, and how life on Earth came to be, and the meaning of it all (at no extra charge.)

The Truth Machine
by James L. Halperin
What would the world be like if scientists developed the perfect lie detector? Halperin argues that such an invention could lead humanity into an era of unequaled prosperity, one in which crime is virtually unknown and true democracy is possible.
(8638 views)

Luminance
by Andreas Ingo
Luminance is a novel about Love Revolution: Revolution of the heart, mind and soul but also about revolution in society. It happens to be set in a parallel universe, on a world resembling a great flower. This is a world of different physical laws.
(3613 views)

In the Days of the Comet
by H. G. Wells - Macmillan Publishers
A provocative novel by H.G. Wells. In the midst of a world war, a comet brushes the atmosphere of earth, causing everyone to lose consciousness for a few hours. When the world awakens, everyone has an expanded understanding of the meaning of things.
(7752 views)

Mars Girl
by Jeff Garrity - Feedbooks
Mars Girl is fast-paced, insightful, inventive and very funny. Its vision of where the mutual dependence of politicians and media producers will end is both hilarious and a little frightening. Required reading for anyone who watches cable news.
(5220 views)