Fundamentals of Music Theory
by Michael Edwards, et al. - University of Edinburgh , 2021
This book presents open licensed educational materials that deal with the building blocks of musical stave (sometimes known as staff) notation, a language designed to communicate about musical ideas which is in use around the world.
(2385 views)

Music Theory
by Mark Andrew Cook - lardbucket.org , 2012
This text is primarily designed to serve as a textbook for a college-level music theory fundamentals course. However, it also has the flexibility to serve equally well for a typical core curriculum college-level Music Theory I or Harmony I course.
(5743 views)

Music Inquiry
by Catherine Schmidt-Jones - Open Textbooks for Hong Kong , 2014
An inquiry based approach to learning about music provides flexible lessons that deepen learners' understanding of music. This hands-on experience also provides practice in self-directed learning that can be applied in any area.
(5429 views)

Music: Its Language, History, and Culture
by Douglas Cohen - CUNY Brooklyn College , 2015
The aim is to introduce you to works representative of a variety of music traditions, and to enable you to speak and write about the features of the music you study, employing vocabulary and concepts of melody, rhythm, and form used by musicians.
(6745 views)

Algorithmic Composition: A Gentle Introduction to Music Composition
by Mary Simoni - Michigan Publishing , 2003
This book is about learning to compose music using the programming language Common LISP and the compositional environment Common Music developed by Heinrich Taube. Algorithmic composition is defined as the use of computers in the generation of music.
(6186 views)

The Illiterate Listener: On Music Cognition, Musicality and Methodology
by Henkjan Honing - Amsterdam University Press , 2011
In this essay Henkjan Honing makes a case for 'illiterate listening', the human ability to discern, interpret and appreciate musical nuances already from day one, long before a single word has been uttered, let alone conceived.
(6402 views)

Fundamentals of Piano Practice
by Chuan C. Chang - PianoPractice.org , 2009
This is the first book ever written on how to practice at the piano! Learn the most efficient practice methods, musical playing, and Mental Play which has been neglected by most teachers; all great musicians used it, yet often failed to teach it.
(6645 views)

Harmonica
- Wikibooks , 2012
The harmonica is much more than a mere toy; it can produce rich music that is impossible for many other instruments. It is easy to learn; no need to remember any fingerings etc., just remember that the notes ascend in a certain way.
(8780 views)

Advice to Singers
by Frederick James Crowest - Frederick Warne & Co. , 1904
There is no subject, perhaps, on which opinions are so divided, as the proper method of training and using the voice. A careful perusal of this book's contents should clear away many misconceptions, and place the student on the right road.
(7554 views)

Harmony Explained: Progress Towards A Scientific Theory of Music
by Daniel Shawcross Wilkerson - arXiv , 2012
How does music actually work? We derive from first principles of Physics and Computation the following fundamental phenomena of music: the Major Scale, the Standard Chord Dictionary, and the difference in feeling between the Major and Minor Triads.
(19718 views)

Piano Playing: With Piano Questions Answered
by Josef Hofmann - Doubleday, Page and Company , 1909
This little book presents a general view of artistic piano-playing and offers to young students the results of such observations as I have made in the years of my own studies, as well as of the experiences which my public activity has brought me.
(8831 views)

The Art of Voice-Production with Special Reference to the Methods of Correct Breathing
by A. A. Pattou - G.P. Putnam , 1882
The author writes for all those wishing to be guided by clear common sense rules and precepts, in the discovery of an easy and natural method of singing. He examines the voice in its cause, which is breath, and in its effect, which is tone.
(13815 views)

Caruso's Method of Voice Production: The Scientific Culture of the Voice
by P. Mario Marafioti - D. Appleton , 1922
The greatest tenor of his day, Enrico Caruso possessed remarkable breath control and enunciation along with an intense quality of vocal pathos. This guide explains clearly and scientifically how singers can emulate his phenomenal vocal production.
(9787 views)

The Elements of Piano Technique
by Ernest Hutcheson - G.F. Kranz Music Co. , 1907
Many of the exercises contained in this little work are purely preparatory in nature, others are for occasional or special use. Only about twenty are permanently essential. All are necessary at some stages of study or to some pupils.
(13735 views)

Music of the Twentieth Century
by Ton de Leeuw - Amsterdam University Press , 2005
Ton de Leeuw was a truly groundbreaking composer. As evidenced by his study of compositional methods that melded Eastern traditional music with Western musical theory, he had a profound understanding of the history of twentieth-century music.
(11409 views)

What Every Singer Should Know
by Millie Ryan - Franklin Publishing , 1910
The author wishes to give all the valuable 'hints' and 'helps' that it has taken years of experience to gather, covering all the questions that are absolutely necessary to know, making it brief, simple and understandable.
(11266 views)

The Mechanism of the Human Voice
by Emil Behnke - J. Curwen & Sons
The author placed before the reader in a simple and comprehensive form the Physiology of the Human Voice. He discarded all scientific terms, and treated the subject in so simple and direct a manner as really to enlighten the readers.
(19421 views)

Learning to Read Music
by Peter Nickol - How To Books , 2008
This book will give you insights into how music is put together. It leads you carefully through the basics of pitch, rhythm, keys, scales, chords, and much more, building your knowledge chapter by chapter until you are able to read music with ease.
(14861 views)

The Physical Basis Of Music
by E. T. Jaynes - Washington University , 1996
The main purpose of this book is to explain certain physical considerations useful not only to a beginner learning how to play a musical instrument, but also to an accomplished musician trying to gain full technical mastery of an instrument.
(16252 views)

The Art of Singing
by Luisa Tetrazzini, Enrico Caruso - Elegant Ebooks , 2008
Caruso was one of the world's most loved male singers and Tetrazzini was an incredible Italian soprano. These pieces on the art of singing are a must for anyone seriously interested in singing. A valuable source of knowledge for future musicians.
(14037 views)

Guitar
- Wikibooks , 2006
This book introduces the basic concepts of guitar playing for novices and intermediate players. It explains important techniques, gives examples and exercises whenever possible. Understanding of music theory is not required.
(15093 views)

Understanding Basic Music Theory
by Catherine Schmidt-Jones - OpenStax , 2007
This text includes a review of common notation and an introduction to the physics behind music theory, as well as the basic concepts of music theory and a few slightly advanced but very useful topics, such as transposition.
(21952 views)

Eyes and Ears: An Anthology of Melodies for Sight-Singing
by Benjamin Crowell - LightAndMatter.com , 2005
Eyes and Ears is a book of melodies for use in practicing sight-singing. It contains about 400 melodies, arranged systematically for education, and sufficient for the first semester or two of a college-level musicianship course.
(15706 views) 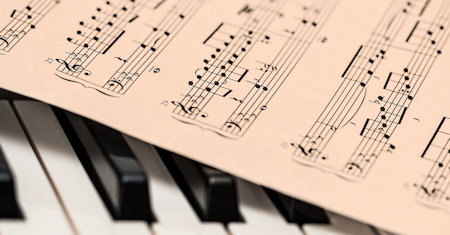