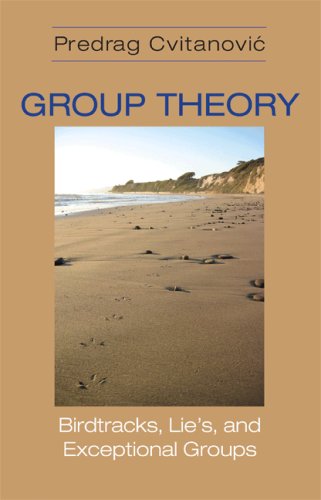 Description:
If classical Lie groups preserve bilinear vector norms, what Lie groups preserve trilinear, quadrilinear, and higher order invariants? Answering this question from a fresh and original perspective, Predrag Cvitanovic takes the reader on the amazing, four-thousand-diagram journey through the theory of Lie groups. This book is the first to systematically develop, explain, and apply diagrammatic projection operators to construct all semi-simple Lie algebras, both classical and exceptional.

Galois Groups and Fundamental Groups
by Leila Schneps - Cambridge University Press
This book contains eight articles which focus on presenting recently developed new aspects of the theory of Galois groups and fundamental groups, avoiding classical aspects which have already been developed at length in the standard literature.
(11564 views)

Groups Around Us
by Pavel Etingof - Massachusetts Institute of Technology
These are notes of a mini-course of group theory for high school students. This course covers the most basic parts of group theory with many applications. The notes contain many exercises, which are necessary for understanding the main text.
(2859 views)

Groups and Semigroups: Connections and Contrasts
by John Meakin - University of Nebraska-Lincoln
In the present paper, I will discuss some of these connections between group theory and semigroup theory, and I will also discuss some rather surprising contrasts between the theories. I will focus primarily on the theory of inverse semigroups.
(7513 views)

Group Characters, Symmetric Functions, and the Hecke Algebra
by David M. Goldschmidt - American Mathematical Society
The book covers a set of interrelated topics, presenting a self-contained exposition of the algebra behind the Jones polynomial along with various excursions into related areas. Directed at graduate students and mathematicians.
(10055 views)