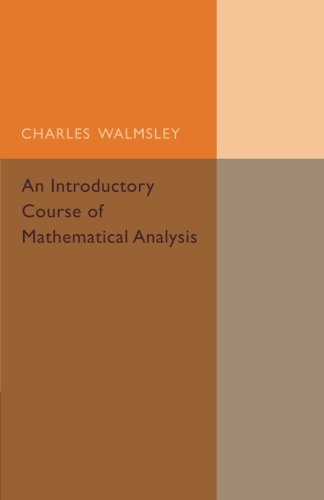 An Introductory Course Of Mathematical Analysis
by Charles Walmsley

Description:
Originally published in 1926, this textbook was aimed at first-year undergraduates studying physics and chemistry, to help them become acquainted with the concepts and processes of differentiation and integration. Notably, a prominence is given to inequalities and more specifically to inequations.

A Course of Pure Mathematics
by G.H. Hardy - Cambridge University Press
This classic book has inspired successive generations of budding mathematicians at the beginning of their undergraduate courses. Hardy explains the fundamental ideas of the differential and integral calculus, and the properties of infinite series.
(7628 views)

Topics in Real and Functional Analysis
by Gerald Teschl - Universitaet Wien
This manuscript provides a brief introduction to Real and (linear and nonlinear) Functional Analysis. It covers basic Hilbert and Banach space theory as well as basic measure theory including Lebesgue spaces and the Fourier transform.
(11150 views)