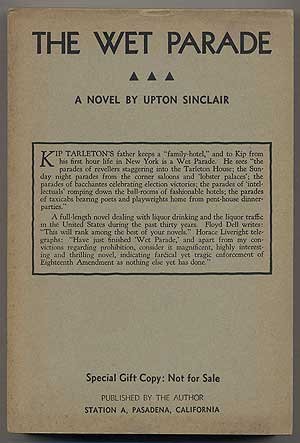 The Wet Parade
by Upton Sinclair

Description:
In the early 20th Century, with the Prohibition Era approaching, two families come undone over the evils of alcohol. The drinking of Roger Chilcote costs him everything, including all his family's money after gambling it away. Chilcote commits suicide...

The Rise of Silas Lapham
by William Dean Howells
About the materialistic rise of Silas Lapham from rags to riches. Silas earns a fortune in the paint business, but he lacks social standards, and morals, which he tries to attain through his daughter's marriage to an aristocratic Corey family.
(7196 views)

The Awakening
by Kate Chopin - H. S. Stone & company
The Awakening is a short novel by Kate Chopin, first published in 1899. It so disturbed critics and the public that it was banished for decades afterward. This brief novel is widely considered to be a proto-feminist precursor to American modernism.
(12159 views)

The Unlit Lamp
by Radclyffe Hall - eBooks@Adelaide
The story of Joan Ogden, a young girl who dreams of setting up a flat in London with her friend Elizabeth (a so-called Boston marriage) and studying to become a doctor, but feels trapped by her manipulative mother's emotional dependence on her.
(5583 views)

Jacob the Unicorn
by Stephen Boyer
Jacob is a young man who is seeking his path in the world. He comes from an abusive upbringing and seeks to escape from his misfortunes. Much of the story is set in Jacob's internal world where he fantasizes the good life, unicorns, and love.
(8590 views)