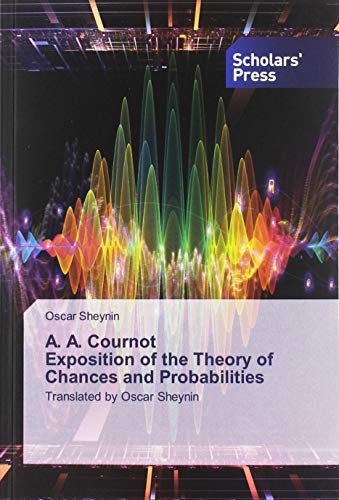 Exposition of the Theory of Chances and Probabilities
by A. A. Cournot

Description:
I aim to make accessible the rules of the calculus of probability to those, unacquainted with the higher chapters of mathematics. The reading of my book will not require any other knowledge except elementary algebra, or even, strictly speaking, algebraic notation.

A Philosophical Essay on Probabilities
by Pierre Simon Laplace - Chapman & Hall
Classic book on probability theory. It demonstrates, without the use of higher mathematics, the application of probability to games of chance, physics, reliability of witnesses, astronomy, insurance, democratic government, and many other areas.
(14371 views)

Introduction to Probability
by C. M. Grinstead, J. L. Snell - American Mathematical Society
The textbook for an introductory course in probability for students of mathematics, physics, engineering, social sciences, and computer science. It presents a thorough treatment of techniques necessary for a good understanding of the subject.
(58933 views)

Radically Elementary Probability Theory
by Edward Nelson - Princeton University Press
In this book Nelson develops a new approach to probability theory that is just as powerful as but much simpler than conventional Kolmogorov-style probability theory used throughout mathematics for most of the 20th century.
(13782 views)