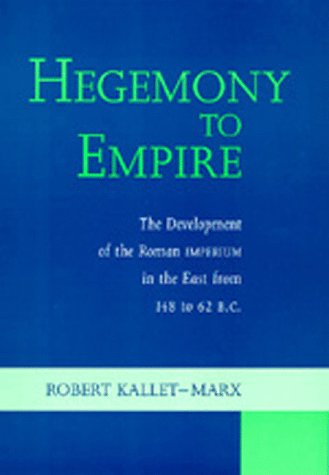 Description:
In one of the most important contributions to the study of Roman imperialism to appear in recent years, Robert Kallet-Marx argues for a less simplistic, more fluid understanding of the evolution of Roman power in the Balkans, Greece, and Asia Minor.

Lives of the Noble Grecians and Romans
by Plutarch
A brilliant social history of the ancient world by one of the greatest biographers of all time. In his most famous and influential work, Plutarch reveals the character and personality of his subjects and how they led ultimately to tragedy or victory.
(12563 views)

A Handbook of Greek Constitutional History
by A.H.J. Greenidge - MacMillan
Lucid and highly readable overview of a difficult and little understood aspect of Greek history: its public law, not just how it was structured but how it behaved in action. Perfect for university students and amateur historians.
(14378 views)

Greco-Persian Wars
- Wikipedia
The Greco-Persian Wars were a series of conflicts between the Achaemenid Empire of Persia and city-states of the Hellenic world. Contents: Ionian Revolt; First and Second Persian invasion of Greece; Wars of the Delian League; Combatants; etc.
(5462 views)