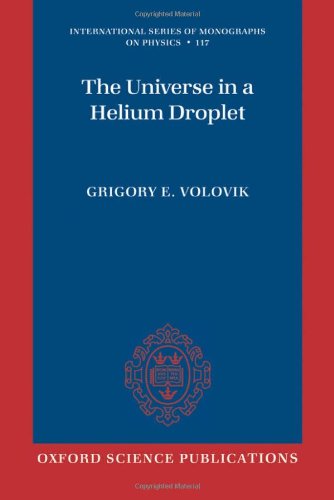 The Universe in a Helium Droplet
by Grigory E. Volovik

Description:
There are fundamental relations between three vast areas of physics: particle physics, cosmology and condensed matter physics. The fundamental links between the first two areas, in other words, between micro-and macro-worlds, have been well established. The main goal of this book is to establish and define the connection of these two fields with condensed matter physics.

Cosmic Structure, Averaging and Dark Energy
by David L. Wiltshire - arXiv
These lecture notes review the theoretical problems associated with coarse-graining the observed inhomogeneous structure of the universe at late epochs, of describing average cosmic evolution in the presence of growing inhomogeneity ...
(7637 views)

TASI Lectures: Introduction to Cosmology
by Mark Trodden, Sean M. Carroll - arXiv
These proceedings summarize lectures in elementary particle physics at the University of Colorado at Boulder. They provide a pedagogical introduction to cosmology aimed at advanced graduate students in particle physics and string theory.
(12613 views)

Introductory Lectures on Quantum Cosmology
by J. J. Halliwell - arXiv
The modern approach to quantum cosmology, as initiated by Hartle and Hawking, Linde, Vilenkin and others. We explain how one determines the consequences for the late universe of a given quantum theory of cosmological initial or boundary conditions.
(13641 views)