Physics of Soft Matter
by Primoz Ziherl - University of Ljubljana , 2014
These notes were prepared for the one-semester course in theoretical physics of soft condensed matter physics for master students. The aim of the course is to provide a broad review the phenomena and the concepts characteristic of soft matter.
(3757 views)

A Primer on Quantum Fluids
by Carlo F. Barenghi, Nick G. Parker - Springer , 2016
This book introduces the theoretical description of quantum fluids. The focus is on gaseous atomic Bose-Einstein condensates and, to a minor extent, superfluid helium, but the underlying concepts are relevant to other forms of quantum fluids.
(5803 views)

Response Theory of the Electron-Phonon Coupling
by R. Starke, G. A. H. Schober - arXiv , 2016
Systematic theoretical enquiry concerning the conceptual foundations and the nature of phonon-mediated electron-electron interactions. We propose a simple scheme to decouple the electrons and nuclei of a crystalline solid via effective interactions.
(4758 views)

The Fundamentals of Density Functional Theory
by Helmut Eschrig - University of Technology Dresden , 2013
A thorough introduction to the theoretical basis of density functional methods in a form which is both rigorous and yet concise. It is aimed for those who want to get a deeper insight into the meaning of the results of practical calculations.
(6485 views)

Quantum Theory of Condensed Matter
by John Chalker - Oxford University , 2013
I aim to discuss a reasonably wide range of quantum-mechanical phenomena from condensed matter physics, with an emphasis mainly on physical ideas. The most important prerequisite is some understanding of second quantization for fermions and bosons.
(7447 views)

Playing with Marbles: Structural and Thermodynamic Properties of Hard-Sphere Systems
by Andrés Santos - arXiv , 2013
This is an overview of equilibrium statistical mechanics of classical fluids, with special applications to the structural and thermodynamic properties of systems made of particles interacting via the hard-sphere potential or related model potentials.
(7557 views)

The ABC of Density Functional Theory
by Kieron Burke, et al. - University of California, Irvine , 2007
DFT is not just another way of solving the Schroedinger equation. Density functional theory is a completely different, rigorous way of approaching any interacting problem, by mapping it exactly to a much easier-to-solve non-interacting problem.
(6718 views)

Condensed Matter Physics With Light And Atoms
by Antoine Georges - arXiv , 2007
Various topics at the interface between condensed matter physics and the physics of ultra-cold fermionic atoms in optical lattices are discussed. Lectures given at the Enrico Fermi Summer School on 'Ultracold Fermi Gases' in 2006.
(6923 views)

Making, probing and understanding ultracold Fermi gases
by Wolfgang Ketterle, Martin W. Zwierlein - arXiv , 2008
This text summarizes the experimental frontier of ultra cold fermionic gases. It is based on three lectures which one of the authors gave at the Varenna summer school describing the experimental techniques used to study ultracold fermionic gases.
(6124 views)

Phases and Phase Transitions in Disordered Quantum Systems
by Thomas Vojta - arXiv , 2013
These lecture notes give a pedagogical introduction to phase transitions in disordered quantum systems and to the exotic Griffiths phases induced in their vicinity. The author also presents a number of experimental examples.
(6765 views)

Optical Microscopy of Soft Matter Systems
by T. Lee, B. Senyuk, R. P. Trivedi, I. I. Smalyukh - arXiv , 2011
The aim of this text is to introduce a variety of optical microscopy techniques available to soft matter researchers, starting from basic principles and finishing with a discussion of the most advanced microscopy systems.
(7953 views)

Statistical Mechanics and the Physics of the Many-Particle Model Systems
by A. L. Kuzemsky - arXiv , 2011
The development of methods of quantum statistical mechanics is considered in light of their applications to quantum solid-state theory. We discuss fundamental problems of the physics of magnetic materials and methods of quantum theory of magnetism.
(10262 views)

Modern Computational Methods in Solids
by Adrian Feiguin - University of Wyoming , 2009
The purpose of this course is to introduce students to a series of paradigmatic physical problems in condensed matter, using the computer to solve them. The course will feel like a natural extension of introductory condensed matter.
(9920 views)

The Condensed Matter Physics of QCD
by Krishna Rajagopal, Frank Wilczek - arXiv , 2000
Important progress in understanding the behavior of hadronic matter at high density has been achieved recently. We discuss the phase diagram of QCD as a function of temperature and density, and close with a look at possible astrophysical signatures.
(9767 views)

Percolation Theory
by Kim Christensen - MIT , 2002
Percolation theory is the simplest model displaying a phase transition. The aim of the percolation theory course is to provide a challenging and stimulating introduction to a selection of topics within modern theoretical condensed matter physics.
(9570 views)

An Introduction to Symmetric Spaces
by Ulrika Magnea - arXiv , 2002
In this text we give a self-contained introduction to symmetric spaces and their main characteristics. We take an algebraic approach; therefore it is not necessary to know almost anything about differential geometry to be able to follow the outline.
(11105 views)

Boulevard of Broken Symmetries
by Adriaan M.J. Schakel - arXiv , 1998
This textbook covers the main topics in contemporary condensed matter physics. The unique and innovative character of this presentation, free of historical constraints, allows for a compact and self-contained treatment of the main topics.
(12824 views)

The Universe in a Helium Droplet
by Grigory E. Volovik - Oxford University Press , 2003
There are fundamental relations between two vast areas of physics: particle physics and cosmology (micro- and macro-worlds). The main goal of this book is to establish and define the connection of these two fields with condensed matter physics.
(17831 views) 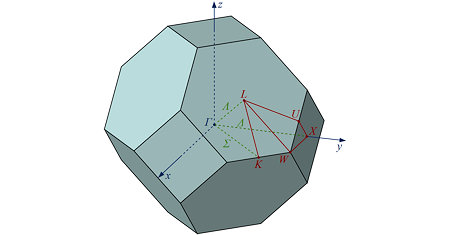