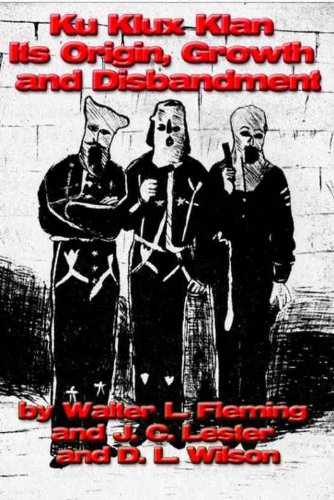 Description:
This small monograph is an early "inside" view of the Ku Klux Klan in Tennessee, where it was first born, written some twenty years after the events of Reconstruction, augmented by an introductory essay written in 1905 by noted historian Walter L. Fleming.

Ocean to Ocean on Horseback
by Willard W. Glazier - Edgewood publishing company
The story of a tour in the saddle from the Atlantic to the Pacific; with especial reference to the early history and development of cities and towns along the route; regions traversed beyond the Mississippi; together with adventures of the journey.
(10219 views)

Hero Stories from American History
by Francis K. Ball, Albert F. Blaisdell - The Athenaeum Press
This book is intended to be used as a supplementary historical reader for the pupils from twelve to fifteen years of age. It is also designed for collateral reading in connection with the study of a formal text-book on American history.
(8802 views)