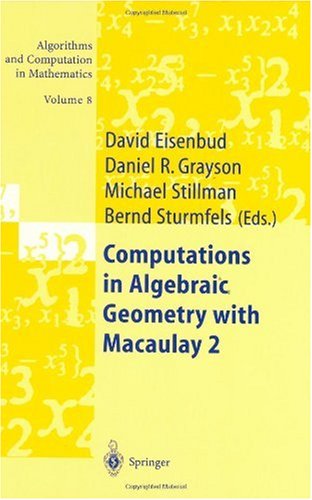 Description:
This book presents algorithmic tools for algebraic geometry and experimental applications of them. It also introduces a software system in which the tools have been implemented and with which the experiments can be carried out. Macaulay 2 is a computer algebra system devoted to supporting research in algebraic geometry, commutative algebra, and their applications.

Introduction to Algebraic Geometry
by Sudhir R. Ghorpade - Indian Institute of Technology Bombay
This text is a brief introduction to algebraic geometry. We will focus mainly on two basic results in algebraic geometry, known as Bezout's Theorem and Hilbert's Nullstellensatz, as generalizations of the Fundamental Theorem of Algebra.
(5757 views)

Linear Systems Theory and Introductory Algebraic Geometry
by Robert Hermann - Math Sci Press
Systems theory offers a unified mathematical framework to solve problems in a wide variety of fields. This mathematics is not of the traditional sort involved in engineering education, but involves virtually every field of modern mathematics.
(10050 views)

Introduction to Stokes Structures
by Claude Sabbah - arXiv
The purpose of these lectures is to introduce the notion of a Stokes-perverse sheaf as a receptacle for the Riemann-Hilbert correspondence for holonomic D-modules. They develop the original idea of P. Deligne in dimension one.
(6240 views)