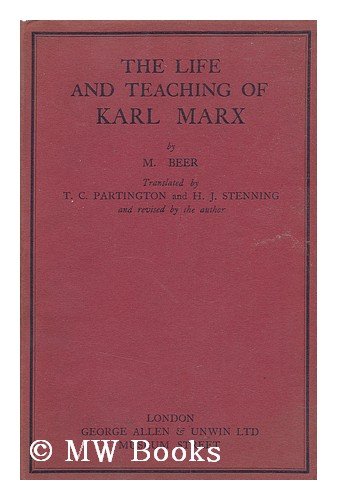 The Life and Teaching of Karl Marx
by Max Beer

Description:
First published in English in 1921, this work was originally written by renowned Marxist historian Max Beer to commemorate the centenary of Marx's birth. It is a definitive biography, full of interesting personal details and a clear and comprehensive account of Marx's economic and historical doctrines. A special feature of this unique work is the new light thrown on Marx's attitude to the 'Dictatorship of the Proletariat' and Bolshevist methods generally.

The Meaning of Mandela
by Xolela Mangcu - Human Sciences Research Council
This lively, engaging and witty collection of lectures brings together the renowned African and African-American scholars - Cornel West, Henry Louis Gates Jr and Wole Soyinka - to reflect on the public meaning of the iconic Nelson Mandela.
(13731 views)

The Autobiography of Benjamin Franklin
by Benjamin Franklin - J.B. Lippincott
The original form of the manuscript is here reproduced in recognition of its value as a picture of one of the most notable personalities of Colonial times, and of its acknowledged rank as one of the great autobiographies of the world.
(22985 views)

The Presidents: A Reference History
by Henry F. Graff - Advameg, Inc.
This a standard resource for students and the general public alike: U.S. presidents from George Washington to George W. Bush are profiled in depth. This is the story of the national political leadership of the country during the nearly two centuries.
(15988 views)

John F. Kennedy: A Life From Beginning to End
- Hourly History
John F. Kennedy is the president that everyone knows. He was a rich man's son, an athlete, a war hero, a ladies' man, a president, his face rendered forever young because the last time Americans saw him, he was riding in a convertible in Dallas ...
(3154 views)