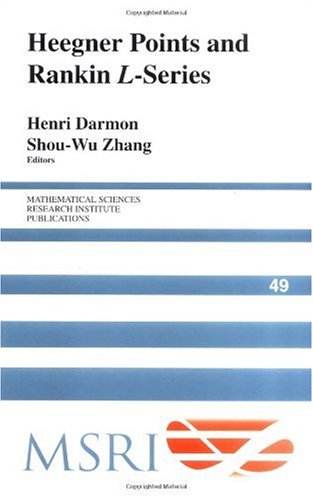 Description:
This volume, based on a workshop on Special Values of Rankin L-Series held at the MSRI in December 2001, is a collection of articles written by many of the leading contributors in the field, having the Gross-Zagier formula and its avatars as a common unifying theme. It serves as a valuable reference for mathematicians wishing to become better acquainted with the theory of complex multiplication, automorphic forms, the Rankin-Selberg method, arithmetic intersection theory, Iwasawa theory, and other topics related to the Gross-Zagier formula.

Complex Multiplication
by J. S. Milne
These are preliminary notes for a modern account of the theory of complex multiplication. The reader is expected to have a good knowledge of basic algebraic number theory, and basic algebraic geometry, including abelian varieties.
(9799 views)

Lectures on Field Theory and Ramification Theory
by Sudhir R. Ghorpade - Indian Institute of Technology, Bombay
These are notes of a series of lectures, aimed at covering the essentials of Field Theory and Ramification Theory as may be needed for local and global class field theory. Included are the two sections on cyclic extensions and abelian extensions.
(9252 views)